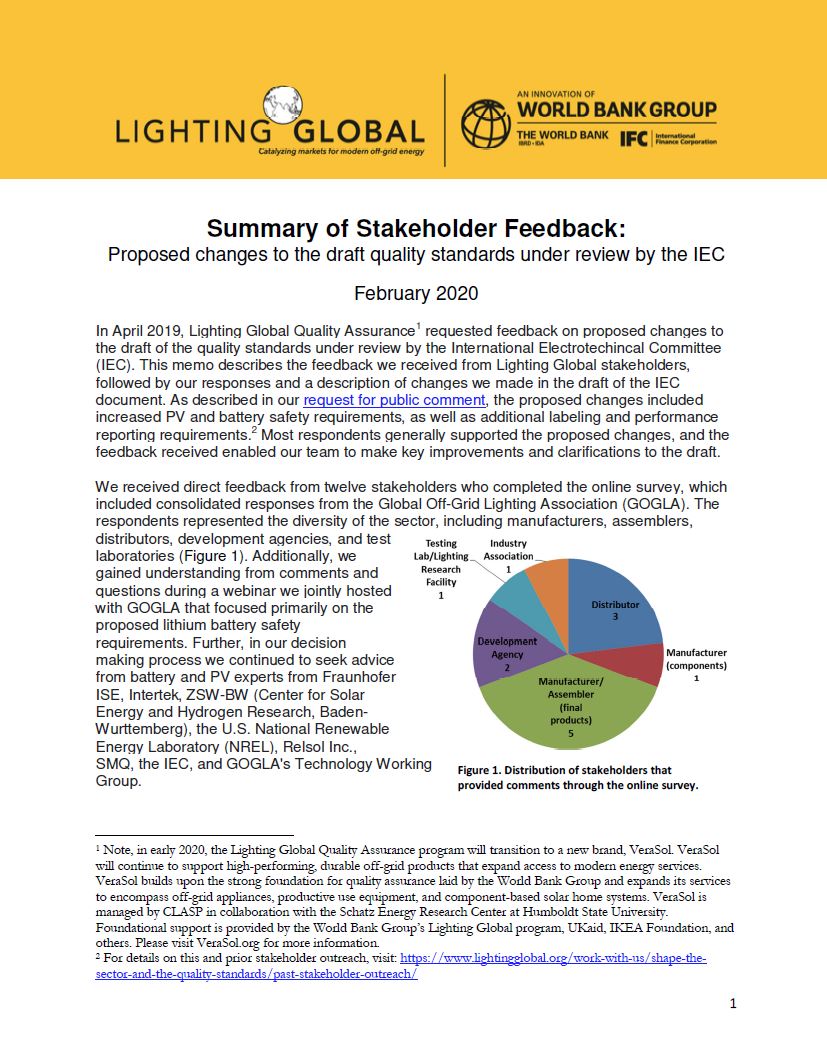 In April 2019, Lighting Global Quality Assurance requested feedback on proposed changes to the draft of the quality standards under review by the International Electrotechincal Committee (IEC). As described in our request for public comment, the proposed changes included increased PV and battery safety requirements, as well as additional labeling and performance reporting requirements. We received direct feedback from twelve stakeholders who completed the online survey, which included consolidated responses from the Global Off-Grid Lighting Association (GOGLA). Additionally, we gained understanding from comments and questions during a lithium battery safety webinar we jointly hosted with GOGLA. Most respondents generally supported the proposed changes, and the feedback received enabled our team to make key improvements and clarifications to the draft, as described in this stakeholder feedback memo.

In January 2020, IEC Technical Committee 82 voted and approved the revised draft for adoption by the IEC. Previously, we had referred to this as a draft of IEC TS 62257-13-1; however, it has now been relabeled with the number IEC TS 62257-9-8. Documents are typically published within one to six months of a positive vote, so we anticipate the final document being published in the first half of 2020. Based on prior conversations, we expect several country governments will likely adopt the published IEC document as a mandatory standard for both pico-solar products and solar home system (SHS) kits with power up to 350 W. Once the IEC document is published the Lighting Global Quality Assurance program plans to use the IEC document in place of the Lighting Global Quality Standards for all pico-solar products and SHS kits. The Change Log for Quality Standards describes differences between the existing Lighting Global Quality Standards and the upcoming IEC document to enable companies to prepare to meet the new requirements. Additional details on this transition will be released in the coming months.