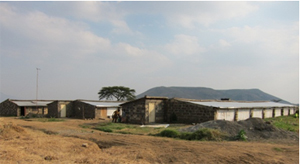 Mr. Karanu successfully runs a commercial chicken farm in Maai Mahiu, Kenya, despite having no connection to the grid. He has a contract with Kenya’s dominant chicken distributor, Kenchic Ltd., to buy chicks and then sell them back when they are grown chickens, typically after a 35-day growth cycle. Lighting is a key element of the maturation process because light stimulates the chickens to eat and grow to their full size and weight. The chickens are raised in houses that are lit for between 20-24 hours per day. On Mr.Karanu’s farm, there are three identical chicken sheds and each one houses about 3,000 chicks. After starting out in 2006 using kerosene lamps for lighting, Mr. Karanu quickly saw the benefits of switching to solar.

“It was basically a cost issue; Kerosene was going up,” he explained.

By investing in a solar and windpowered lighting system, he said he spent a significant amount up front, but knows he will save in the long run.

From August to September 2010, Lighting Africa and The Lumina Project conducted a field test on Mr.Karanu’s farm during one chick rearing cycle.

“They definitely had more light and the advantage was that you could adjust the lamps the way you want.”

In addition, results showed that in the first two sheds, chicks clustered to feed under available light sources, whereas in the LED house the chickens spread themselves more evenly because the LED bulbs provided a broader light distribution.

Mr.Karanu acknowledged that, of the three options, the portable LED solar lamps worked the best.

Each shed was lit using different off-grid lighting sources: kerosene lamps, fluorescent lights powered by Mr.Karanu’s solar/wind system and good quality portable solar LED lighting.  At the end of the study, while the chickens rate of growth stayed fairly constant in all three cases, there were key differences in light emission, distribution and efficiency, including: