New GOGLA-IFC Report Shows 3.77 Million Off-Grid Solar Products Were Sold in the Second Half of 2016, Despite Difficult Conditions in Key Markets 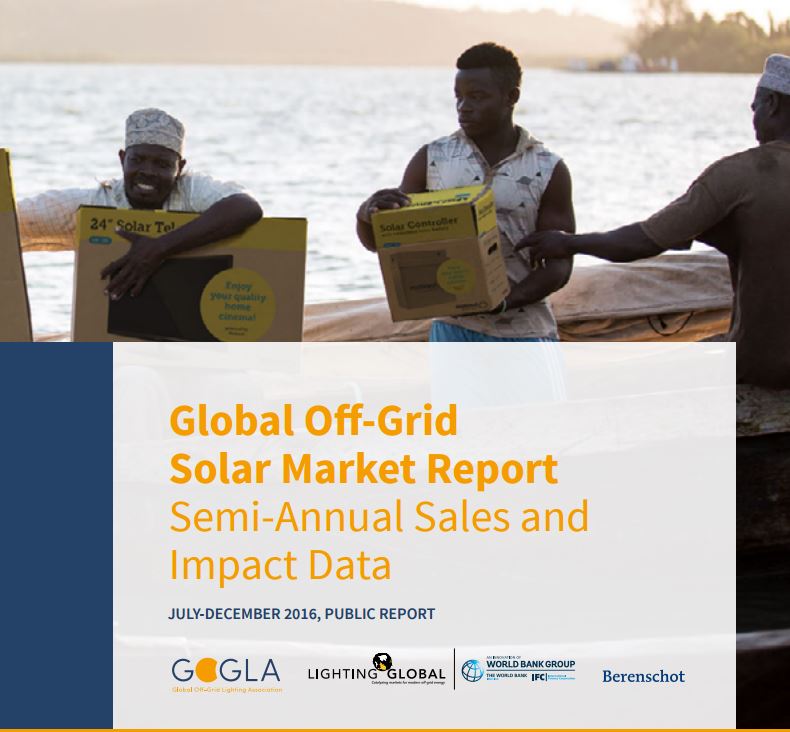 Today, Lighting Global, the World Bank Group’s platform to support sustainable growth of the international off-grid solar market, and GOGLA, the Global Off-Grid Lighting Association, launched the latest Global Off-Grid Solar Market Report, which includes performance data from 55 companies and covers the period of July to December 2016.
This latest publication builds on the previous two reports (H2-2015 and H1-2016), and is the third in a series of six-month market updates co-produced by Lighting Global and GOGLA that track the swiftly evolving market for modern, clean, and affordable off-grid solar energy products worldwide. In addition to key sales figures across a range of product categories, the report also looks at important market drivers and other influencing factors—including climate, currency devaluation and market concentration—to knit together a complete picture of the latest results and current environment.
“The importance of having accurate, timely data on the off-grid solar market cannot be emphasized enough,” stated Koen Peters, Executive Director of GOGLA. “The figures shown in this report, provided by the 55 companies who participated, highlight to us that there are many external developments that have strong impacts – both positive and negative – on business results. With an increasingly nuanced and complete understanding of the market, each round enables us to better tailor our calls to action to governments, investors and donors looking to support off-grid energy access, as well as to provide off-grid solar enterprises with further improved market insights to shape their global strategies.”
Russell Sturm, Global Head of Energy Access at the International Finance Corporation, a member of the World Bank Group, added, “The global market is still in its relative infancy, and the industry continues to innovate at a remarkable clip. However, by definition, the industry focuses in volatile country markets, where energy access remains a fundamental challenge and resilience to factors like drought and fiscal uncertainty have an undeniable effect on the economies. While the promise remains great for the industry to drive sustainable development, it is clear that realizing this potential will require long-term commitment.”
Key Figures: