A letter from Russell Sturm: The Hidden Face of Energy Poverty

Dear Friends of Lighting Global,
Before IFC launched the Lighting Africa program in 2008, the World Bank Group had worked for at least 15 years alongside  providers of solar home systems to help the more than one billion people lacking access to modern energy. The effort was met with limited success. But it led to Lighting Africa.
Inspired by a convergence of rapidly improving and increasingly affordable solar and storage technologies—and a revolution in efficient LED lights and appliances—Lighting Africa was designed in partnership with first-mover companies to lower their risks and build a vibrant enabling environment. With the persistence, commitment, and innovation of entrepreneurs and stake holders, a billion-dollar solar off-grid industry has emerged, providing modern energy to hundreds of millions of previously underserved people.
Fast forward to 2019. While too many people still live without access to modern energy services, the off-grid solar market is thriving. We now see a pathway to universal access, if we can maintain the momentum of the past decade’s work. Lighting Global will continue to support the off-grid solar industry as we round the corner in pursuing this goal.
Yet one piece of the energy poverty picture remains glaringly unchanged: the nearly one billion people who live with connections to electric grids that simply don’t work. The resulting burden of back-up generator dependence is a tyranny of energy poverty that remains mostly obscured, despite the stark reality of living with a fuel-fired generator: belching smoke, grinding noise, unhealthy workplaces and homes, and a huge cost burden on all who operate these filthy beasts.
IFC is raising the flag on this hidden face of energy poverty. Our new report, The Dirty Footprint of a Broken Grid, provides for the first time an aggregate picture of the dimensions and consequences of the global fleet of back-up fuel-fired generators in 167 developing countries. Working with Humboldt State University’s Schatz Energy Center, we use the best publicly available data to provide a conservative approximation of the global footprint.
The picture it paints is alarming.

The report estimates that there are 20-30 million sites using these generators globally, consuming 40-70 billion liters of fossil fuel annually at a cost of nearly $50 billion, enabled by an additional $1.1-2.1 billion in government subsidies.

IFC’s work, supported through a partnership with the Governments of Italy and the Netherlands, as well as the IKEA Foundation, is the starting point for the global research efforts needed to build a more comprehensive and granular picture, from which meaningful policy action can be supported.
Today’s landscape of technological promise and budding entrepreneurial capacity takes me back to the early days of Lighting Africa and the infancy of the off-grid solar market. The cost curves are crossing today for distributed solar and storage alternatives to fuel-based generators, just as solar devices had become a superior alternative to kerosene lighting and generator-based phone charging by 2009.
The time has come for a second distributed solar revolution. We look forward to working with development partners and private companies to lead the way to a safer, quieter, cleaner, and more affordable energy future for the hidden victims of non-functioning electric grids.
Sincerely,
Russell Sturm
Head of Energy Access
International Finance Corporation 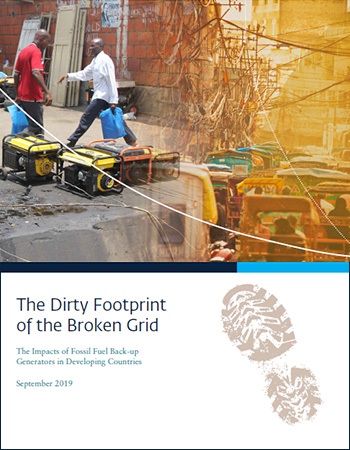